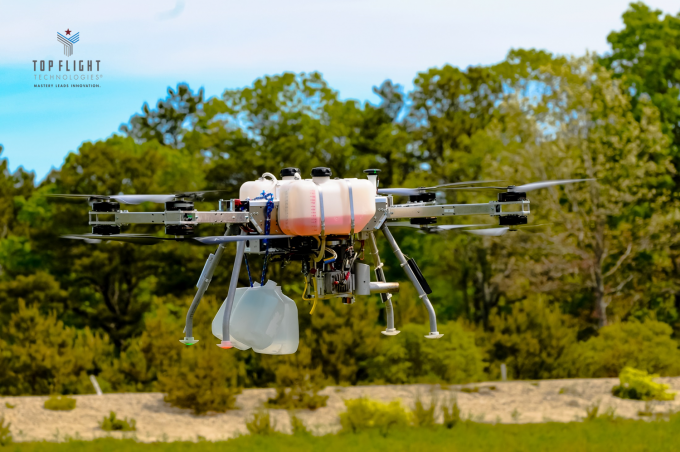 You’ve heard about Amazon’s coming-any-day-now drone delivery project? It may soon be everywhere, capable of delivering anything. And if you’ve ever taken an Uber car through snarled city traffic and wondered how quick your trip would be if you could just sail over all those cars? You may have your chance.

Most of us have heard of military drones, such as the Predator B, employed for surveillance, reconnaissance, and (highly controversial) missile strikes. And then there are the familiar civilian versions used for more peaceful purposes by filmmakers and amateur photographers who want a dramatic aerial view.

As agile and useful as they can be, the smaller, commercially available aircraft have some drawbacks when it comes to doing heavy work: Most drones are powered by batteries and have a relatively short flight time, ranging from 15 to 30 minutes. And they generally can carry only small payloads, 5 lbs. or less.

Top Flight’s drone uses gasoline to power the lift motors and charge the batteries that run the drone’s electronics, including sensors, communications equipment, and a “digital gearbox,” a set of electronic controls that helps the engine to run more efficiently.

The engine weighs about 17 lbs. and can generate 10 kilowatts. All that power significantly expands the flight time and payload for the drone. The Top Flight craft can fly for 2.5 hours and can carry up to 20 pounds. More than enough lifting power to drop off your Game of Thrones: The Complete Seasons 1–6 Blu-ray box.

But, Top Flight has even loftier plans for their future. Phan and his team are working on a 100-kilowatt heavy-lifting, long-distance drone. According to Phan, “With a 100-kilowatt hybrid electric engine, concepts like air taxis become viable,” he says. “By 2020, you may see a drone fly a person.”