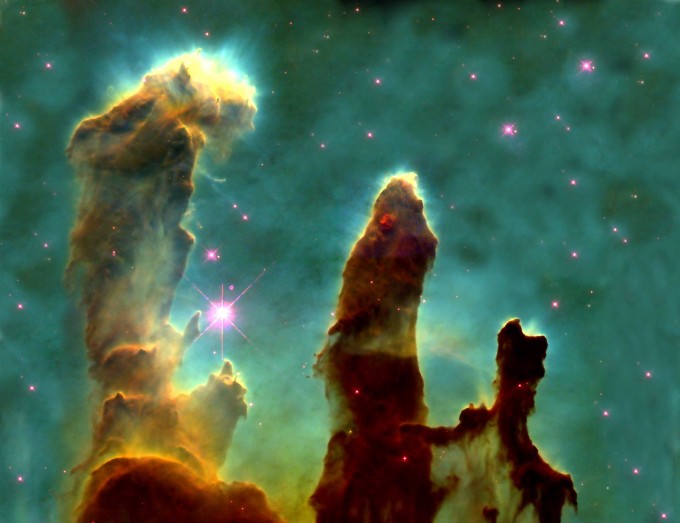 One of Hubble Space Telescope’s most spectacular photos sent home was the image we got in 1995 of the “Pillars of Creation.” Now, in celebration of Hubble’s 25 years in orbit, we get the “new and improved view” of the Eagle Nebula twenty years after the iconic photo was created.

The latest versions were unveiled this month at the 225th meeting of the American Astronomical Society in Seattle. The new photos, using the Wide Field Camera 3 that replaced the Wide Field and Planetary Camera 2 in 2009, provide us with sharper images and even a new near-infrared perspective.

It is hard to imagine that the images could get any more dramatic than the earlier composites, with the pillars of gas and space dust billowing upward, illuminated by the blasts of star births taking place all around in the Messier 16 (M16) Eagle Nebula, a kind of “star nursery” a mere 6,500 light years from Earth. The distinct color-coding in the visible-light photographs indicates the chemical composition of the ionized gasses: green for hydrogen, blue is oxygen and red-orange denotes sulfur.

The new infrared image eliminates much of the thick gas that gives the impression of density to the spires and allows for clarity in viewing the multitude of young stars that are hidden in the visible-light view. This enhanced resolution has more of an ethereal feel since the gaseous columns are viewed as mere wisps of clouds, but is captivating in its portrayal of the vastness and activity of the cosmos.

Though twenty years is but a blink in time, the astronomers are excited about the subtle differences they can note even in that short time span. Paul Scowen of Arizona State University at Tempe was an original observer, along with fellow astronomer Jeff Hester, of Hubble’s earlier photos. Scowen says of the pillars that we are in a “unique and short-lived moment in their evolution.” He notes that, though the image was originally seen as “Pillars of Creation” they are actively in a process of destruction as well. “The gaseous pillars are getting ionized, a process by which electrons are stripped off of atoms, and heated up by radiation from massive stars. And then they are being eroded by the stars’ strong winds and barrage of charged particles, which are literally sandblasting away the tops of these pillars.”

The “Pillars of Creation” photo has inspired awe and a bit of commerce, too. The image has been used to sell T-shirts and coffee mugs, among other objects, and even took its place in history on a postage stamp. These new images may be less commercially impressive for their lack of newness, but they will still inspire future generations of astronomers to peer beyond the pillars of gaseous clouds into the depths of cosmic creativity.