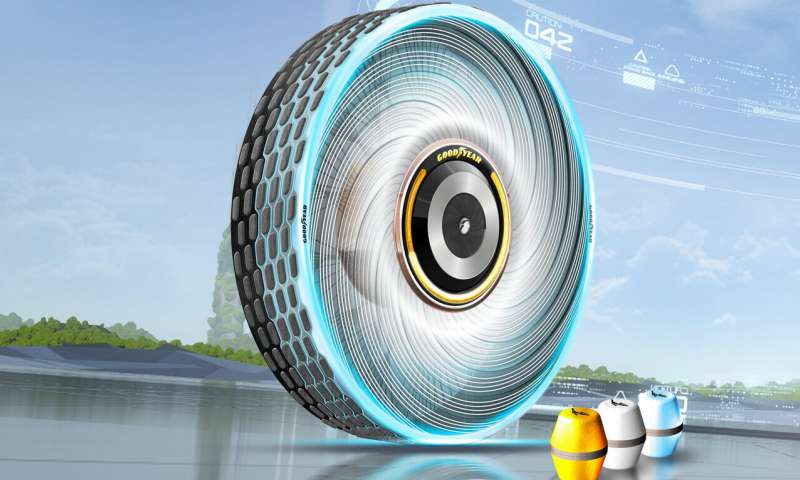 Tire pollution is impacting air, water as well as land. About 250 million tires were scrapped in the US in 2017. Wearing of tires is an unavoidable fact of life.

“The tire is one of the few components that doesn’t stay on for the life of the vehicle,” says CTO Chris Helsel. “It’s replaced quite often. So the first problem to solve was to make the tire more of a permanent structure, as part of the vehicle itself.”

Goodyear’s innovative tire concept is going to revolutionize the auto industry. If Goodyear’s scientist’s concept works, then you won’t have to replace complete tires just because a few millimeters of rubber wear off. Dubbed reCharge, this concept tire will automatically generate its own tread… continuously replacing the rubber that sloughs off from daily use.

ReCharge’s regeneration capabilities will be provided by a biodegradable, reloadable liquid compound that’s recharged by capsules. This liquid compound is made from biological material and is reinforced with fibres inspired by spider silk.

For recharging the tires, drivers will have to insert a capsule containing this liquid compound it into the centre of the wheel.

Electric vehicles (EVs) are generally heavier than their gas-powered counterparts. Moreover EVs apply greater torque during acceleration. Because of this, tires of EVs wear out tires 20 to 50 percent faster.

Helsel says. “So you’re going to need a tire that lasts longer. This idea will allow for extended tire life and much easier swaps, and replacing just the cartridge will require one tenth of the number of parts that would need replacing compared to conventional tires.”

DNA Switch Could Give People the Power to Regrow Limbs