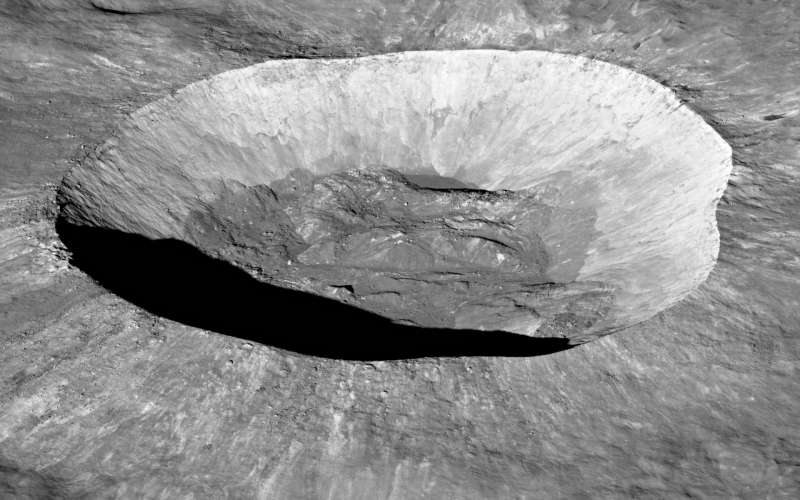 This is the Giordano Bruno crater on the far side of the moon… a prime place to build a lunar telescope. NASA/Goddard/Arizona State University

Astronomers from the University of Texas at Austin have revived a decade-old idea that was abandoned by NASA. They are going to build a liquid-mirror telescope to study the stars.

A concept for a liquid-mirror telescope on the moon was originally proposed in 2007. The idea is to stare deep into the past. Scientists want to investigate the birth of the universe’s first galaxies.

They want to erect the telescope– dubbed the ‘Ultimately Large Telescope’ (ULT) – at a lunar pole to collect light from stars that existed before galaxies had even formed.

The University of Texas at Austin astronomer and co-author Volker Bromm said, “This moment of first light lies beyond the capabilities of current or near-future telescopes. It is therefore important to think about the ‘ultimate’ telescope, one that is capable of directly observing those elusive first stars at the edge of time,”

This moon telescope will be different from usual telescopes. According to the observatory, “The telescope’s mirror would be a spinning vat of liquid, topped by a metallic — and thus reflective — liquid,”

The diameter of the mirror would be about 330 feet (100 meters). The telescope could run on solar power. The data collected would then make it back to Earth through a satellite in lunar orbit.

As the telescope is liquid-based, it would be easier to transport to the moon. Its size and location at the lunar pole would make the telescope extremely powerful.