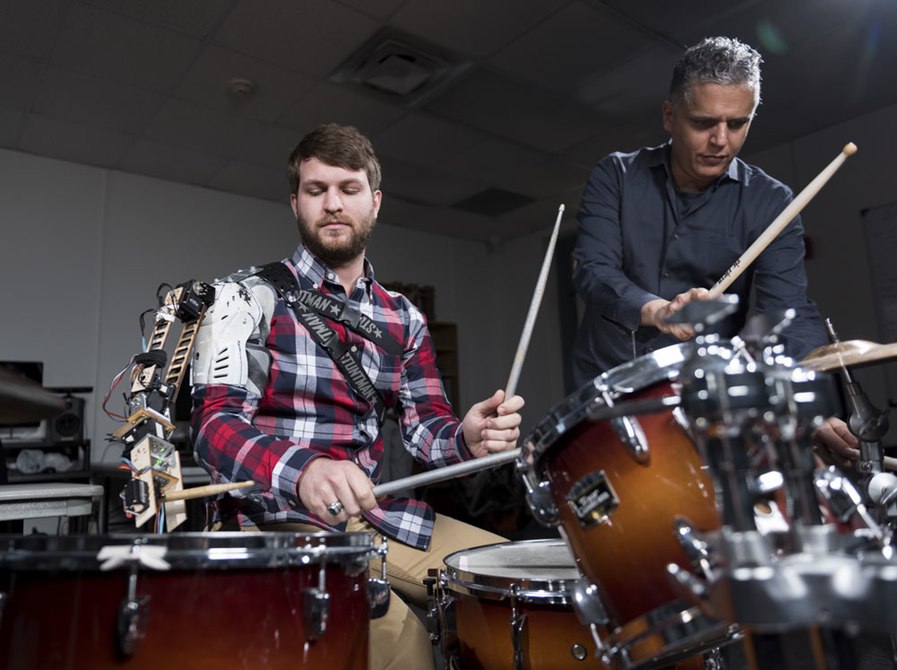 Initially, the robotic drummer arm was designed for use as a prosthetic for a drummer who lost an arm. Check out his story here.

Now, a drummer with two arms wearing a headband equipped with sensors can utilize the robotic drummer arm as another limb for percussion, ultimately becoming a cyborg drummer.

At the moment, the robotic arm kind of just listens and plays to the best of its ability instead of intuitively interacting with what the human is playing. Here’s how the robotic drummer arm works, according to Georgia Tech:

The robotic arm is smart for a few reasons. First, it knows what to play by listening to the music in the room. It improvises based on the beat and rhythm. For instance, if the musician plays slowly, the arm slows the tempo. If the drummer speeds up, it plays faster.

Another aspect of its intelligence is knowing where it’s located at all times, where the drums are, and the direction and proximity of the human arms. When the robot approaches an instrument, it uses built-in accelerometers to sense the distance and proximity. On-board motors make sure the stick is always parallel to the playing surface, allowing it to rise, lower or twist to ensure solid contact with the drum or cymbal. The arm moves naturally with intuitive gestures because it was programmed using human motion capture technology.