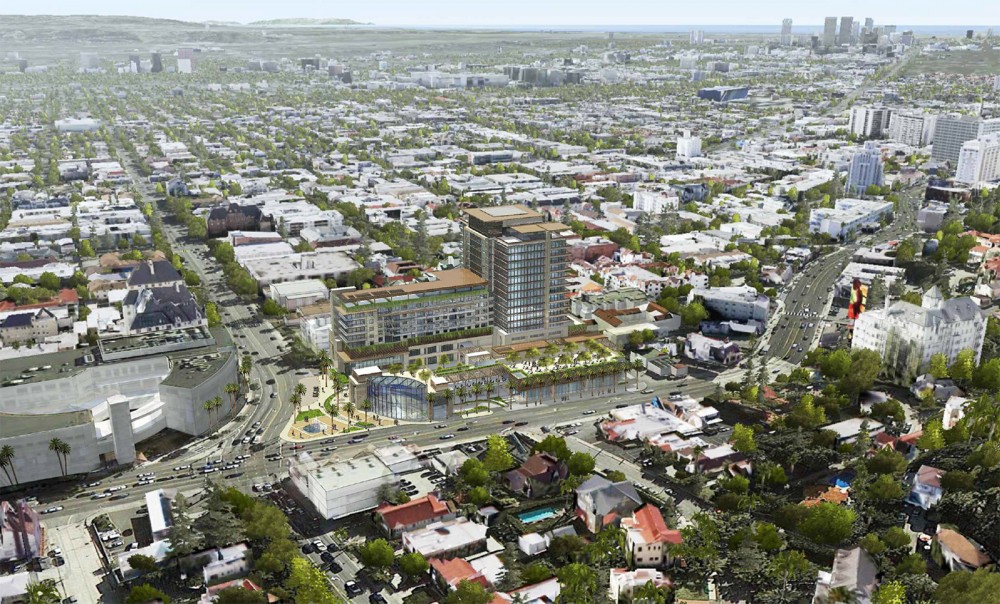 Earlier this week, Townscape Partners announced that Frank Gehry has been chosen for the 8150 Sunset Project to redesign the eastern gateway, pictured above, to the 1.5 mile (2.4 km) Sunset Strip in West Hollywood.

The Sunset Strip runs between Crescent Heights Boulevard on the east and Doheny Driver on the west and divides Hollywood from Beverly Hills. It is home to boutiques, Hollywood nightspots, rock clubs, restaurants and cutting-edge entertainment.

Following is more information on the project from ArchPaper.com and includes links to the impact study and nearby landmarks.

According to its Draft Environmental Impact Report (PDF), the new complex, consisting of two buildings sitting on a raised podium, will include 249 apartments, about 100,000 square feet of restaurant and retail space, and a large central plaza. Updated plans and renderings are set to be released this spring, according to developer Townscape Partners.

A group called Save Sunset Boulevard is fighting to block the project, calling it a “hideous monstrosity,” and attacking its EIR. Among other things the association, which is represented by anti-development lawyer Robert Silverstein, called out the project’s potential to add to congestion, dwarf local historic buildings, block views, and waste water and other resources.