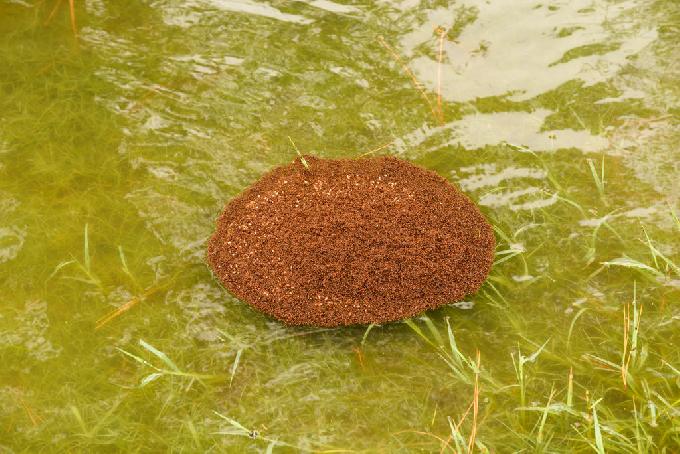 In the middle of the horrific devastation caused by Hurricane Harvey, residents of the Houston area have one more issue to tackle–floating islands of fire ants.

These venomous insects, known for their painful bites, are native to South America. But because of their exceptional adaptation abilities, they have spread throughout the southern United States.

Recently, these fire ants displayed one of their exceptional adaptation skills by coming together to form stinging horror rafts. in which individual ants take turns above water.  Ants on the bottom layer are knitted so tightly together that water can’t get through. To protect the queen and larvae, these are placed at the center of the raft.

While searching for dry landing areas, these ants can survive for weeks or even longer.

According to Molly Keck, an entomologist at Texas A&M AgriLife Extension Service, “They hook their feet and hang onto one another to preserve their colony while flooded. When the water recedes, or they float to a spot where they hit dry land, then they’ll build their colony again in their spot.”

These ants are very dangerous. Keck said, “Once they hit you, you’re a solid surface so they’re gonna crawl on you. When the first one stings, they emit a pheromone that causes a chain reaction that tells everybody else to sting, so you’re going to experience quite a few stings.”

She added, “They’ll kind of roll up when you brush against them, and so that’s an easy way to try and get them to detach from you.”

This Jellyfish Holds The Secret To Immortality… Capable of Reversing The Aging Process!