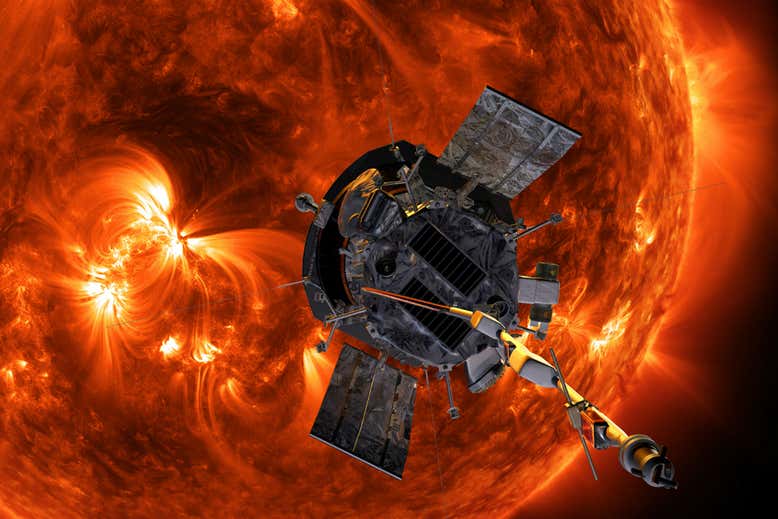 The outermost layer of the sun blazes at 1 million degrees Celsius, nearly 900 times as hot as lava. Imagine something touching its hot outer atmosphere…mere thought of it will burn anything to ashes.

However, NASA’s Parker Solar Probe has reached so near to the sun that it touched the hot blistering outer layer of the Sun.

The size of a small car, Parker is the fastest spacecraft ever built. It is the first human-made object to come as close as possible to the sun.

The probe was launched back in 2018. It has been flying closer and closer ever since. On 29 April, the probe made its closest pass yet to the sun. Clocking at around 330,000 mph or 532,000 km/h it reached a distance closest to the sun at 6.5 million miles or 10.4 million kilometers from its surface.

For comparison, this speed means it can encircle the whole Earth thirteen times in just under an hour or would take around 40 minutes to fly from Earth to the moon. This speed is about 0.05 percent of the speed of light.

But the Parker Solar Probe isn’t done yet

29th April was only the eighth pass out of the spacecraft against a planned 24 before the end of the mission in late 2025.

On each pass, the probe will use Venus’s gravity to shape its orbit, pushing the spacecraft closer and closer to the sun. At its closest, the Parker Solar Probe will be just less than 7 million kilometers or around 4.3 million miles from the sun.

While the spacecraft is close to the sun, it will measure the magnetic fields in the region and trace the flow of energy within the sun. This could help researchers to resolve the mystery around why the outermost layer of the sun is hotter than the inner layers.