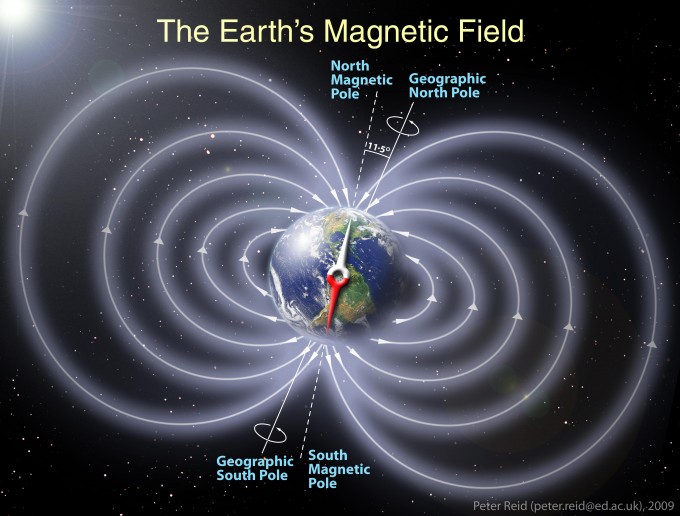 There’s a lot of talk lately about the inevitable flip of Earth’s magnetic poles, since an international group of geoscientists has determined that the last flip took place about 780,000 years ago, but occurred over a surprisingly short span of time.

The whole notion can be a bit unsettling and can surely provide fodder for end times theorists. After all, if we can’t count on the consistency of north being north and south being south, what can we ever be certain of? And what the heck causes such an implausible event to occur? True to Earth’s dynamic and sometimes chaotic nature, even the geomagnetic poles are in a state of flux. But don’t stock up on MREs because it won’t happen in our lifetimes, or even our great, great grandchildren’s. And it won’t be as catastrophic as the sensationalists might lead us to believe.

Nonetheless, it’s a mindboggling concept to ponder and an eventual certainty, since it has happened many times in Earth’s 4.54 billion year history. In fact, we are already seeing indications of polar shifting, or more accurately, drifting. Over the last couple of centuries magnetic north has been traveling about 25 miles per year and gaining, apparently heading for Siberia.  And the magnetic field has been weakening as well, at an astonishing rate of about five percent per decade, according to the European Space Agency’s satellite data.

But even that evidence of activity is no reason to fret. It won’t likely happen for about another 2,000 years or so. There is really no way to predict these events or even the exact magnitude of reversal. In Earth’s long history there have been full out pole reversals and lesser fluctuations, known as “excursions.” The excursions start to reverse but only manage to make it across the equator before returning to the original polarity.

These past magnetic shifts are evidenced in rocks with iron oxides, which show striations of magnetic variations. The international geophysicists have scrutinized the deposits of volcanic lake sediments in Italy and determined that the last full reversal of polarity occurred in about a brief 100 year span.

The reasons for these reversals are not completely clear. Earth’s liquid outer core rises and falls with the heat of the solid inner core and earth’s rotation sets a vortex in motion that creates our dipole magnetic field. To complicate things a bit more, the dipole field and the overall magnetic field that protects us from frying under the sun’s intensity can operate somewhat independently. Thus, the poles can flip without much incident to Earth’s surface activities.

But Earth’s current human activities, such as electric grids, could very well be disrupted by magnetic fluctuations. Let’s hope future generations of human ingenuity have developed non-grid, alternative energy systems by then. But, it’s hard to tell which way it might go for the human species. A lot can happen in a millennium or so.