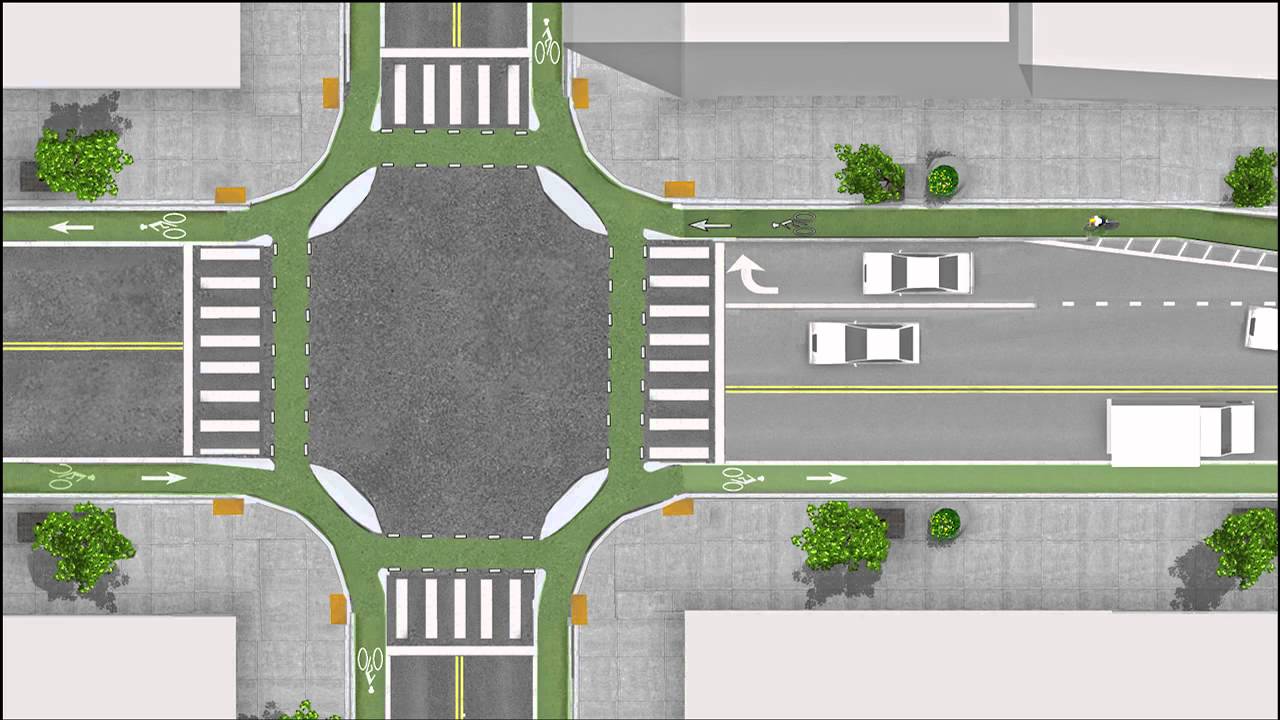 While cities work to present a bike friendly and family oriented nature, designers still fall short of keeping bicycles and autos from colliding. But, this innovative protected intersection known as the “Dutch junction” could go the distance in keeping the two apart.

As we strive to reduce pollution and dependence on fossil fuels while also working to promote a more physically active society, it is ever more important that we give due attention to the various options of transportation. I live on the outskirts of a college town that makes an effort to provide for pedestrians, bicyclists, and scooters. Even so, it is typically insufficient at safely accommodating the current population of riders, let alone an increase in bicyclists and cars as the university and city grow.

Though bike lanes help to define an exclusive space for bicycles on the straightaway, intersections can be a treacherous area to safely navigate. The vehicle making a right turn has to cross over the bicyclists’ lane, and all too often the rider is caught in the driver’s blind spot. Not to mention the careless driver who anxiously wants to catch the green light without considering the non-motorized mode of transport traveling next to him.

A few progressive U.S. cities have instituted what is common in the Netherlands and known elsewhere as the Dutch junction. Versions are being implemented in Davis, Boston, Salt Lake City, and Austin. Even Vancouver B.C. has decided to try it out.

The prominent design feature is the concrete island situated between the bike lane and the street’s right lane, at each corner of an intersection. This forces the bicyclist to veer into the view of the driver, who must go on the other side of the island to make a turn, thus unable to go into the bike lane.

City planners should take every opportunity at development to include the best available options for bicycle traffic to flow safely alongside motor vehicles. The good news is we don’t have to go in blind. There are models in countries like the Netherlands where bicycling is a natural part of everyday life for many of their citizens. And now, we even have some good examples to work from here in the USA.

According to the Insurance Institute for Public Safety, approximately two percent of motor vehicle crash deaths each year in the US are bicyclists. Considering the small number of bicyclists compared to cars on our roadways, that tragic number is even larger than it seems. And, with Gen Xers and Millennials biking more and driving less, this seems like a good time to prepare for a future of more bicycles and fewer cars. We have a whole lot to gain and not much to lose in giving this design a try.

If you are an avid cyclist who has had your own nearly tragic brush with a car, you might want to take this concept to your city planners and county commissioners to give them prodding to try the Dutch junction in your town. I intend to offer it to mine.