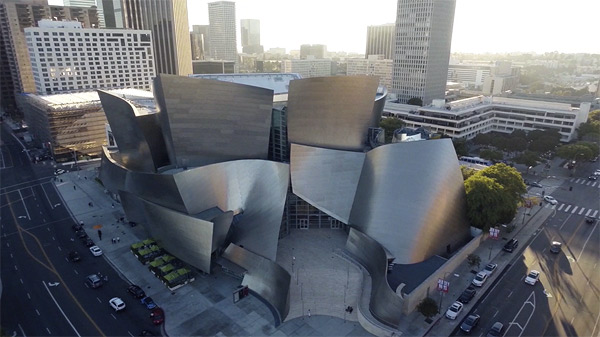 The following drone video of Los Angeles, by Ian Wood, allows those who don’t know Los Angeles well – and maybe some long-time residents – to see the city in a new light. I know my image of LA was mostly of a city of traffic jams and smog. But that has changed! If anything, this video shows LA as a colorful and creative place.

Wood’s video is clear evidence that we can learn a lot about our environment with this new drone technology.

The video has a great soundtrack: BLu ACiD’s electro-blues adaptation of “If You Ain’t Never Had The Blues” by Boo Boo Davis!

Places Shot by Wood in this Video

The following locations/murals/buildings are included in this video can also be seen on a Google Map created by Wood:

Ian Wood’s Overview of the Video

The following is Wood’s explanation of the video on Vimeo:

This is the city-wide follow up to my aerial exploration of downtown Los Angeles from last year. And much like with downtown, I continue to be awestruck by how much of this vast city I have partially or completely overlooked before undertaking this video. And like most voyages of discovery, I’ve realized there’s so much more to find.

Packing it all into one short-form video has been nigh impossible and much didn’t make it for safety, privacy or simply because I couldn’t make it 30 minutes long! Notably missing are: LAX Theme Building, both Gettys, some Lautner homes, numerous beautiful buildings, the Gabba gallery, many murals that vanished before I got to them, and much of downtown featured in last year’s video.

The music is BLu ACiD’s electro-blues adaptation of “If You Ain’t Never Had The Blues” by Boo Boo Davis and is used with permission. I felt it fitting to a city of eclectic styles and influences, equal parts refined and rough edges. The version used here is my own extended edit. Download the original song here: itunes.apple.com/us/album/if-you-aint-never-had-the-blues/id1006196698?i=1006197030

Droning For Good
With all the controversy about drones, it’s important to remember that they can be (and often are) used responsibly. As with many emerging technologies, the laws struggle to keep up and we must employ a common sense approach to their use that is respectful to community, safety and the law.

For queries regarding my aerial filming, please contact me by email, aerial@ianwood.com.