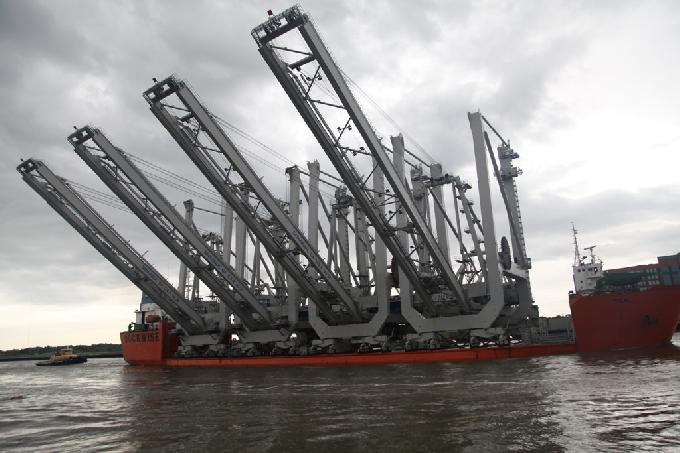 Naval architects and civil engineers on the Eastern seaboard have been working overtime because the ships and all the equipment and facilities that support them were designed to “fit” the old “Panamax” or the old dimensions of the Panama Canal that are currently being enlarged.  To stay competitive port operators must modernize facilities, ships and equipment to fit the newly expanding canal.

The Port of Savannah has extensive facilities located along the Savannah River approximately 18 miles from the Atlantic Ocean. The Port of Savannah has been the fastest growing seaport in the United States over the past decade with a compound annual growth rate of 20%. This ranks the Port as the fourth busiest terminal in the United States handling more than 2.3 million twenty-foot equivalent units (TEU) or containers.

At a cost of $600 million the Georgia Ports Authority is in the midst of deepening the Savannah River shipping channel from 42 to 50 feet along 36 miles of its length to accommodate the New Panamax ships and upgrading its logistics capabilities.  The project is scheduled for completion in 2016.

In bringing together a team of experts the Port of Savannah needed architect and engineering firms with experience in deep draft navigation and water channel design, dredging and dredging disposal, and coastal currents and erosion management.  It also needed firms experienced with multi-objective public works projects, especially those who have worked with the U.S. Army Corps of Engineers (USACE).  These firms also had to have experience in environmental, estuarine, and coastal processes to deal with significant environmental and hydrodynamic challenges. Finally all project elements had to be evaluated from a cost/risk analysis perspective.

Gaining approval for the project, especially along environmental lines, has been difficult, controversial and time consuming. By dredging and deepening the harbor and the river saltwater will move up the river having a negative impact on protected wildlife, estuaries, and marshes.

With two years to go until the Panama Canal Expansion is complete the stakes are high. US seaports generate $3 trillion of economic activity each year and support 14 million US jobs.  Recent calls for doubling exports by 2025 have put added pressure on US ports, like the Port of Savannah, to beef up operations to handle projected volume increases. The prospect of adding 15,000 jobs for every $1 billion in new exports means a lot in today’s slow growth economy.

Astronaut Scott Kelly, Aboard the ISS, Tweets Stunning Video of the Aurora Borealis