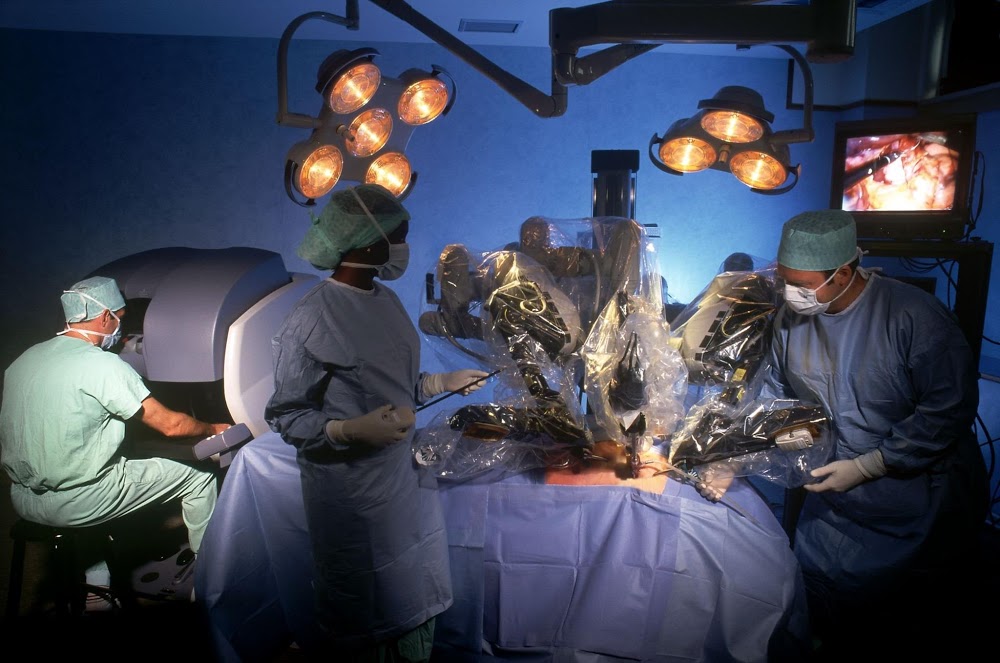 The urban dictionary lists “robot benders” as extreme robot fighting events where two robots enter and one leaves, “angry robots” as having killer laser beams and rusty chassis, “Robosapiens” as robots pretending to be human, and “fembots” as female robots built to take down the bionic woman. Obviously, robots have captured the popular imagination! “Laproscopic” surgery refers to “minimally invasive surgery” performed through small incisions (0.5-1.5 cm)

Da Vinci Surgical System, currently the most successful of robotic surgical robots, operates in several thousand hospitals worldwide and conducts over 250,000 surgeries a year. The system costs an average of $2.5 million and includes several hundred thousand dollars a year in annual maintenance fees. The remote doctor views the patient through an endoscope allowing viewing of magnified three-dimensional images of the body.

Robots using tiny instruments can perform surgeries with smaller incisions and more precise movements. Hand tremors and accidental movements that can negatively affect surgery are reduced and robotic instruments can reach areas that are difficult for human surgeons. Sitting at a computer terminal is less physically demanding in some types of surgery. At the current time, robotic surgeries take longer than human performed surgeries in general, and they are significantly more expensive.

Developing an accurate model of a patient is extremely important to the success of robotic surgery. Computer Assisted Surgery is being used in neurosurgery, maxillofacial, ENT, orthopedic, visceral, and radiosurgery procedures.

Creating an accurate model of a patient is achieved through medical imaging technologies such as CT, MRI, x-rays, ultrasound, and others. The area to be operated on is scanned and uploaded to a computer, creating data sets that are fused together to provide a 3-D reproduction of the exact shape and size of normal and pathological tissues and structures in the region. In addition, image analysis and processing, diagnostics, preoperative planning and surgical simulation, and surgical navigation help create a higher chance of desired outcomes.