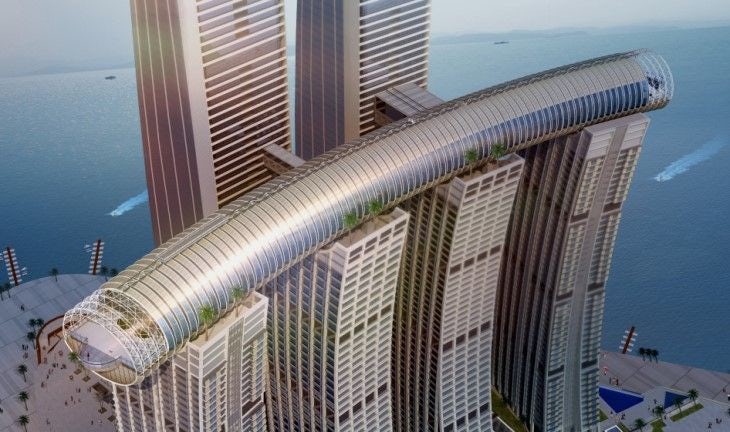 China seems determined to rise more and more with its impressive engineering feats. China already has world’s second-tallest skyscraper and the highest bridge and now soon highest skybridge is going to add in this list.

Named as “The Conservatory”, it will sit astride four 250 m (820 ft) high towers. With 300 m (984 ft) long “horizontal skyscraper”, it will hold the world record of the highest sky bridge linking the towers. Currently under construction in China’s third largest city Chongqing, it intends to break all the records and dethrone the Marina Bay Sands in Singapore.

This Raffles City Chongqing project is headed by the architect Moshe Safdie and it will have 134,000 sq m of homes, shops, offices, entertainment, transportation links and a public park.

Some exclusive features of “The Conservatory” are:

Developer CapitaLand explained, “To erect efficiently, the steel structure is first divided into nine segments – four segments that are built in-situ above the four towers; three middle segments suspended between the four towers that are prefabricated on ground and hoisted into place by hydraulic strand jacks; and two cantilever segments that are assembled in short sections from the two ends of the rightmost and leftmost towers,”

Construction on this architectural and engineering marvel is almost 80% complete  and it will open in phases from 2Q 2019.