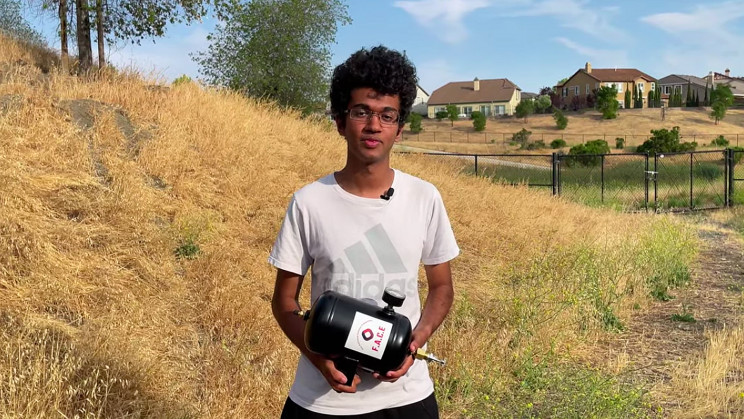 Global warming has led to an increase in wildfire areas burned over the past few decades. According to wildfire statistics, from 2011 to 2020, annually there were about 62,805 wildfires and about 7.5 million acres impacted in the US only. However, in 2020, 58,950 wildfires burned about 10.1 million acres, the second-most acreage annual impact since 1960.

Even at present California is struggling with one of the biggest wildfires in its history. Thousands of its residents are displaced to safer places…and it is not over yet.

Now, San Francisco high school student named Arul Mathur is on a mission to save homes from wildfires. This teenage boy has designed a new kind of fire extinguishing equipment called the Fire Activated Canister Extinguisher, or FACE.

Arul said, “I heard about the hundreds of thousands of people who evacuated their homes every year to flee from wildfires, but I never thought that I could be one of those people,”

“Finally, in the summer of 2019, a wildfire threatened to force my family to evacuate our home. At that moment, it became personal. I knew that I needed to do something about it.”

The device has a metallic cylinder packed with a blend of water and Cold Fire, an ecologically safe fire retardant. It also has an air valve on top, an air pressure gauge on the side, and a sprinkler head on the bottom.

When the temperature rises to 155°F (68°C), a glycerin element bursts within. As soon as that happens, an Eco-friendly fire-retardant disperses in a 360-degree spread. It is sprayed 5-6 feet in all directions with the aid of a sprinkler.

The device is self-contained and can be set up anywhere, from a fence to a front porch. Once it is installed, “it’s there, it’s ready and it doesn’t require any more manual intervention after that,” Arul told NowThis Kids.

Arul said, “I reasoned that by owning self-activating fire suppression, individuals no longer had to be reliant on the fire department to save their homes,” “Firefighters could focus on containing the fire, while we, as residents, could control the fate of our property.”