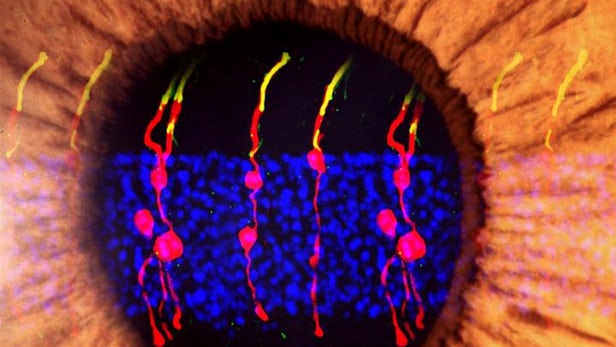 In a big breakthrough, a team of researchers at the Icahn School of Medicine at Mount Sinai in New York City has successfully reversed congenital blindness in mice by turning dumb cells in the retina into seeing ones.

They did this by using gene therapy to reprogram base retinal cells into functioning rod photoreceptors. (Photoreceptor cells are light-sensitive cells on our retinas that respond to light and signal the brain, which allows us to interpret what we are seeing).

It’s a major finding since retinal degenerative diseases have no cure currently.

It might be possible to reverse blindness in the future

In our body, cells are constantly dying and being replaced by new ones, but with age, the rate with which cells die speeds up. The rate of replacement, however, slows down.

Neurons, including light-sensitive photoreceptor cells, won’t regenerate on their own if they’re damaged.

Scientists found that some animal species, such as zebrafish, can convert structural cells called Müller glia into new, functioning photoreceptors to restore lost vision. This new study has now shown the way to do the same in mammals.

“This is the first report of scientists reprogramming Müller glia to become functional rod photoreceptors in the mammalian retina,” says Thomas N. Greenwell, NEI program director for retinal neuroscience. “Rods allow us to see in low light, but they may also help preserve cone photoreceptors, which are important for color vision and high visual acuity. Cones tend to die in later-stage eye diseases. If rods can be regenerated from inside the eye, this might be a strategy for treating diseases of the eye that affect photoreceptors.”