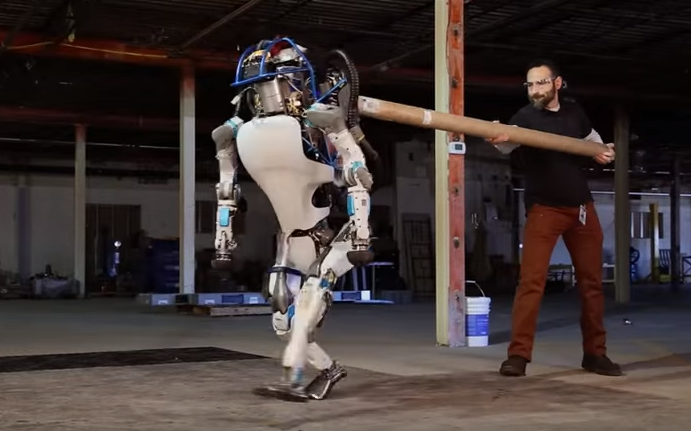 It’s a bit unsettling how quickly the two-legged Atlas robot from Boston Dynamics is progressing.

What was once a cool robot, with a bunch of wires and cords hanging from it doing karate moves and strolling through the woods, is now lifting and setting down 10-pound boxes.

So not only can the Atlas robot potentially take your warehouse job from you, if you get mad and push it down as shown in the video, the robot can now get back up.

The future is now in the form of the Atlas robot, a machine that is only going to get even more impressive and efficient moving forward.

A new version of Atlas, designed to operate outdoors and inside buildings. It is specialized for mobile manipulation. It is electrically powered and hydraulically actuated. It uses sensors in its body and legs to balance and LIDAR and stereo sensors in its head to avoid obstacles, assess the terrain, help with navigation and manipulate objects. This version of Atlas is about 5′ 9″ tall (about a head shorter than the DRC Atlas) and weighs 180 lbs.