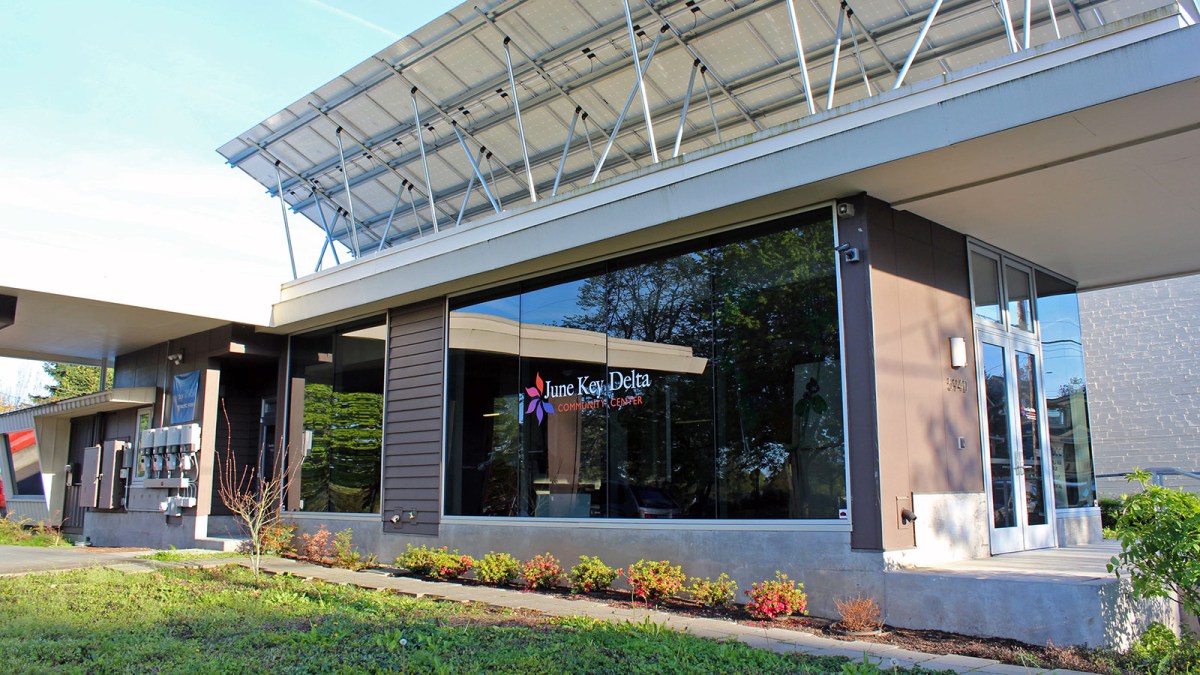 I received a phone call from a Delta sister at Howard University who, true to the nature of these fine women, wanted to assure that credit was given where due. She was concerned that the original title gave the impression that the Howard University Deltas were involved in the project, but it was wholly the impetus and energy of the Portland Deltas that accomplished this remarkable feat. They also wanted to be clear that, even though the Deltas were founded at Howard, they have now become an international service organization that does not require attendance at Howard in order to belong. If you are interested in learning more about their service projects, visit http://www.portlanddeltas.org/ .

You either have to be very gutsy, slightly crazy, or a little of both to visit a dilapidated former gas station and imagine you could turn it into an eco-rehabilitated community center. But when passion overtakes you, making sense is not the first priority. These women are testimony that with drive, gumption, and imagination your theme song becomes, “Aint No Stoppin’ Us Now.”

This group of African American women from the Portland chapter of Howard University’s Delta Sigma Theta needed a meeting hall. Faced with a lack of funds and few volunteers, though their dream would seem insurmountable for most, they set out to find a building they could fix up bit by bit. These gals had gumption and failure to succeed was not an option.

They found a rundown old former Arco gas station full of grit and grime, and families of mice that had taken up residence claiming squatter’s rights and resisting eviction. The flat roof leaked, the wiring was bad or nonexistent. And the place was filled with junk that needed to be removed before any rehab work could even begin. The Deltas incorporated the help of family and friends to accomplish the task. That was in 1992.

The idea of a meeting hall came about as a result of the Deltas being African-American in Portland, a city often given the moniker of being “one of the whitest cities in America.” Since the chapter’s inception in 1945 they’d been meeting in members’ homes for lack of a space that would allow them the right to gather. So with a little seed money in the late ’80s, Delta June Runnells Key set out to find them a place of their own.

But, it was the late Delta sister Chris Poole-Jones who took the project on a community minded and ecological turn. A former librarian, she naturally saw the building as a much needed place for a community gathering space and took to learning the skill of writing grant proposals. She attended workshops on sustainable possibilities and, with her newly developed skill, sought funding and partners.

Since then, it’s been kind of a stone soup of progress. With each exciting addition of a new eco-friendly aspect, came new awards and new volunteers.

University of Oregon professor Greg Acker and his graduate students came up with five designs in the early 2000s and architect Mark Nye presented the final design utilizing many of the materials on-hand, such as shipping containers and salvaged wood. Finally, in 2007 construction was underway and in 2011 the grand opening took place with great fanfare. Their steadfast determination had resulted in a building that went from a brownfield to one of the greenest buildings in Portland.

The June Key Delta Community Center now boasts a certification even beyond LEED as they keep their eyes on a “prize” of creating a “Living Building” which takes into account how the structure incorporates human interaction into the space.

The physical space is a sustainable demonstration model, creatively using existing materials where possible. Old shipping containers became bathrooms and even the kitchen. The large picture windows were salvaged and recycled tires became flooring. The local paint recycling center offered gallons of colors that were saved from becoming landfill waste.

But, they also incorporated new technologies for sustainability, such as the rainwater collection system and the more than 60 solar panels that provide electricity for the building. And, they took their eco-values to the outside as well, with passive shading and permeable landscape pavers that allow for soil percolation instead of runoff.

A hundred years after the Delta Sigma Theta sorority was started by twenty-two Howard University women in 1913, it comprises a membership of 200,000 at 900 chapters across the globe, some Howard alumnus, some not, but all pledged to service.

The Portland chapter has exampled the Delta’s national theme: “A Sisterhood Called to Serve: Transforming Lives and Impacting Communities.” Lives are certainly transformed and their Portland community impacted by the workshops and events hosted at the community center. There’s even an art gallery that displays the work of local African-American artists.

Now the Delta sisters are selling bricks to raise the $50,000 needed to “Burn the Mortgage.” Somehow, with all they’ve accomplished so far, that seems a minor challenge for these feisty matriarchs.