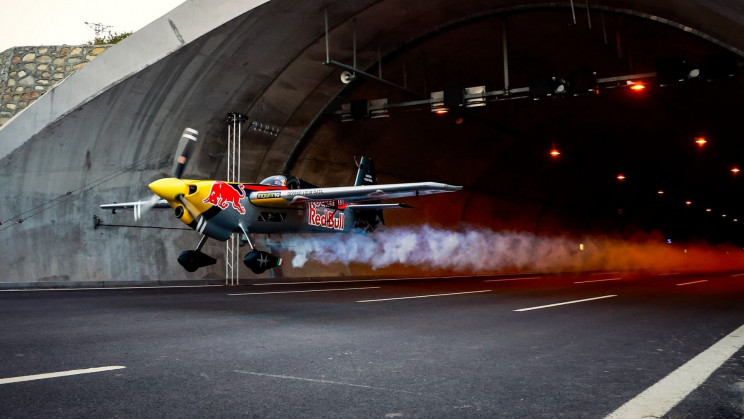 On September 4, Red Bull Air Race and stunt pilot set a spectacular world record by flying a plane through tunnels. He broke a total of “four” world records including the Guinness World Record for the longest tunnel flight with a plane. He cleared Turkey’s dual Catalca Tunnels in less than 44 seconds.

Red Bull reported, “From take-off to exiting the second tunnel, the flight covered a distance of 2.26 km [1.4 miles]. And in less than 44 seconds, Dario Costa had set a certified Guinness World Record plus four more,”

Costa passed through the two tunnels at an average speed of 245 km/s. He first flew through the shorter Çatalca-2 tunnel. Later he plunged into the longer 1,638m (5,374ft) Çatalca-1 section.

To make it a success, the weight of the race plane was reduced. It was also fitted with a Formula One seat, human-made ‘sharkskin’ to reduce drag and improve efficiency and lift.

But it was not easy for him to fly in the tunnels, because of the crosswind

“Everything seemed to be happening so fast, but when I came out of the first tunnel, the plane started moving to the right because of the crosswind and in my head, at that moment everything slowed down,” Costa explained. “I reacted and just focused on getting the plane back on track to enter the other tunnel. Then in my mind, everything accelerated again. ”

After the flight, Costa said, “I’ve never flown in a tunnel in my life – no one has ever done it – so I had a big question in my head about whether everything would go as we expected. It was a great relief, of course, but great, great happiness was the main emotion. For me, this is another dream come true. “