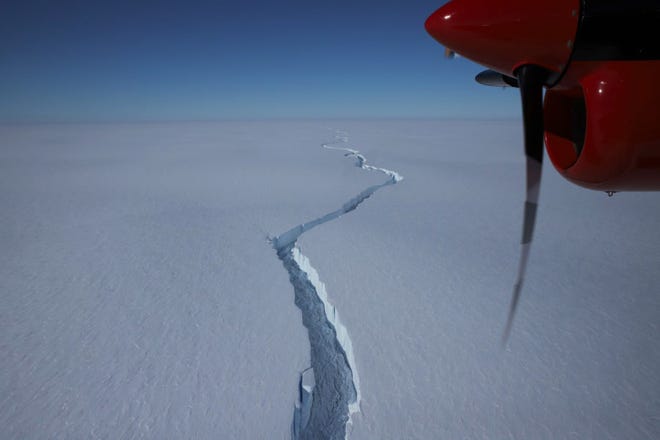 Recently a huge iceberg, over 20 times the size of Manhattan, just broke off from Antarctica’s Brunt Ice Shelf. This splitting-off comes after the buildup of a large crack in the floating ice during the past decade.

According to the British Antarctic Survey (BAS), this giant iceberg measures about 490 square miles (1,270 square km) and is about 500 feet (150 meters) thick.

BAS Scientists were expecting this split for almost a decade after the first “vast cracks” had formed on the shelf.

In fact, over the last decade researchers have seen three major cracks grow in the floating ice shelf. However, last November a new gap, called the ‘North Rift’, emerged. Then it started heading toward another major crack roughly 21 miles (35 km) to the northeast.

In January, it grew about one kilometer a day. As a result, the crack finally widened to several hundred meters…freeing it from the rest of the ice shelf.

Dame Jane Francis, the director of the BAS, said, “Our teams at BAS have been prepared for the calving of an iceberg from Brunt Ice Shelf for years,”
“Over [the] coming weeks or months, the iceberg may move away; or it could run aground and remain close to Brunt Ice Shelf.”

Simon Garrod, the BAS director of operations, said, “Our job now is to keep a close eye on the situation and assess any potential impact of the present calving on the remaining ice shelf,”