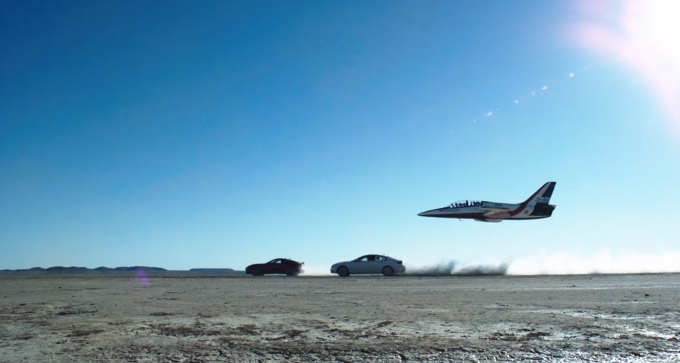 Radio communications with the BLOODHOUND Supersonic Car will be critical to the team’s success in setting a 1,000mph (1,609km/h) World Land Speed Record.

Last autumn, an L39 jet aircraft flew multiple passes down BLOODHOUND’s specially prepared South African desert track, synchronized with the new All-Wheel-Drive (AWD) Jaguar F-TYPE R Coupe driven by Project Director Richard Noble and a Jaguar XF sedan, at closing speeds of up to 650mph (1,046km/h). The cars carried the same equipment that will stream data, voice and imagery live from the BLOODHOUND Supersonic Car during test runs and record attempts in September this year and again in 2016.

The event was attended by representatives of the Northern Cape Government, the Project’s hosts in South Africa, and was the successful culmination of months of preparation by BLOODHOUND’s Technical Communications Partners MTN, Emcom and Poynting.

Last autumn’s communications test saw BLOODHOUND take an important step towards fulfilling its ultimate goal: to inspire a generation about science, technology, and engineering by sharing a unique engineering adventure.

To that end, data from over 300 sensors, plus three streams of 720p video, will be transmitted live via a single channel from the jet and rocket powered vehicle as it blasts down the desert racetrack during the test. By way of comparison, a modern F1 car transmits 150 channels of data over a single radio channel during a Grand Prix weekend. Each run by BLOODHOUND SSC will generate information equivalent to 125 MP3 music tracks played concurrently.

Beaming data at over 1,000mph (1600km/h) will push available communications technology to the limit. To meet the challenge, MTN and Poynting Antennas have created a bespoke 4G LTE (Long-Term Evolution) network for the Project, based on known and trusted mobile telephone technology. The 800MHz signal is highly focused, rather than broadcast, to ensure the network has ‘link budget’ capable of streaming 4 Megabytes per second of data live from the car as it covers a mile in 3.6 seconds (a kilometre in 2.25 seconds).

During the test, the signal was captured by BLOODHOUND engineers on the track. Later this year and in 2016, it will travel to the team’s Mission Control Center and then be relayed to the nearest town, Upington, 80 miles (130 kilometers) away, to be fed into the Internet, ready to be viewed by schools, colleges and other audiences worldwide.

For this test, custom-made Poynting antennas with Sierra Wireless Air Prime embedded LTE modems were mounted on the Jaguar XF, replicating the kit that will be built into BLOODHOUND’s tail fin. Simulated BLOODHOUND SSC data and footage from four high-resolution Stemmer Imaging cameras, equipped with unique BJR lenses, was streamed live from the Jaguar XF during the high-speed passes.

Driving in tandem was an All-Wheel-Drive Jaguar F-TYPE R Coupe carrying Emcom’s latest Digital VHF Radio technology. This equipment has been specially calibrated to ensure clear voice communication from the Team to both Andy Green in the supersonic car and Jaguar’s two Rapid Response Vehicles. The test ensured there were no frequency clashes across the spectra the team will be utilizing at the 54 square mile (142 square km) area of Hakskeen Pan.

Flying above the cars in the L39 Jet, BLOODHOUND’s IT manager Sarah Covell measured signal strength from the 60m tall solar powered MTN mast 9 miles (14.5 km) to the West of the track.

The activity confirmed that the project’s entire radio infrastructure is now in place, ready for September and the beginning of BLOODHOUND’s high-speed campaign. It was also a testament to the outstanding support and expertise of BLOODHOUND’s partners in South Africa and the UK.