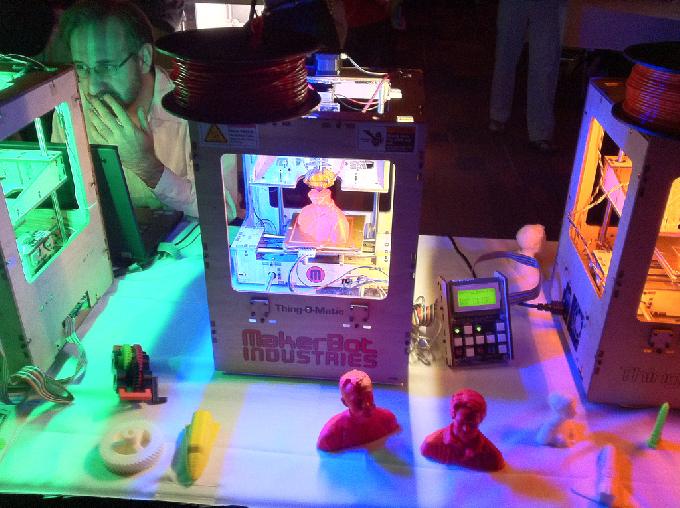 Imagine what you will replicate when you get your first 3D printer!  A new beak for your bird?  An engagement ring for your fiancée?  Prosthetics for a loved one that can be enlarged as they grow?  A lover’s lips for a coffee cup lid? You are only limited by your imagination.  Hollywood recently used a 3D printer to replicate an Aston Martin DB 5 which was to be blown up in a chase scene.  Instead of destroying the priceless original, three 3D replicas were made to complete the scene.

3D printers have been around for over two decades in high-end manufacturing but it was not until recently that they have started to become available to the general public or widely used by small businesses.  Most current 3D printers are still made for commercial or industrial use and are high performance and powerful but carry high price tags: $10,000 to $50,000.  This is not unusual as the personal computer was popularized in the business sector over at least a decade and only became popular in the home and small business after millions of larger businesses had thoroughly adopted them.  This puts the 3D printer at about where PCs were in 1980 or color printers were in 1990.

The pioneer in personal 3D printers was Reprap a clearing house for kits, open source 3D software, and compact 3D printers.  The open source movement has embraced 3D printers and so personal adoption may move faster than previous technologies. There are now literally hundreds of 3D printer makers worldwide including Asian makers and copycat cloners.  Recently consumer and personal 3D printers have begun to hit the market, most being kits, which cost as little as $500 up to $3,000 for the most basic home or small business 3D printers.

Most 3D printers use ABS plastic to create objects but more advanced models use up to 14 materials in a single print job.  Materials can be of different colors, translucent, flexible, rubbery, or stiff allowing for flexible joints or rigid skeletal structures covered by softer materials.

MakerBot, a small company in Brooklyn, New York has been bringing affordable 3D printers to consumers for several years.  Their latest model, the Replicator-2 is priced at $2,199 and generates objects up to 11 by 6 inches.  Their more advanced model, priced at $2,999 prints smaller items, 9 by 6 inches, but with more detail.

On Kickstarter, a company called Formlabs has raised close to $3 million and is led by a team of engineers who got their start at MIT.

A generation ago Apple ushered in the age of desktop printing and it is expected that a small company like MakerBot or Formlabs will lead the 3D printer revolution, bringing cost effective 3D printing to the masses.

Jet Fuel From ‘Gutter Oil’? Boeing & China Plan To Make It Happen!
The First Hyperloop Tubes Just Arrived in the Desert of Nevada for Testing