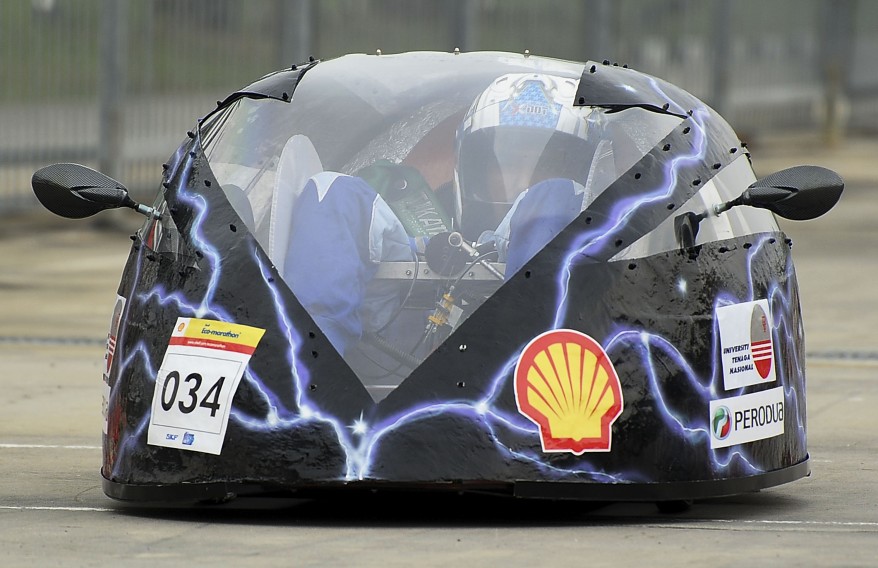 After a nail-biting finish the French team Microjoule from La Joliverie have topped the Prototype leaderboard for the fifth consecutive year in a petrol-fuelled car. Chased by relative newcomers Team GAMF from Kecskemet College from Hungary, who achieved 2,696 km/l, victory was uncertain until the last moment. “It was tense – the other team was out on the track with us for the final attempt,” says Clément You, Microjoule Team leader. “Tonight we will celebrate – and next year our goal is 3,000 km!”

In one of the other seven fuel categories, French team Polyjoule, Polytech Nantes, was a few seconds over the time limit in their final attempt powered by hydrogen. But an earlier distance of 541 km/kWh was enough for victory. “We played with fire,” says team leader Sebastian Sors. “And it paid off!” In the gas-to-liquids (GTL) category the MAC Eco Team from the Netherlands broke the 2011 record, achieving 416 km/l.

The UrbanConcept class considers needs of everyday drivers and could inspire advances in sustainable car design. Winners included the DTU Roadrunners from Denmark, who came first in the ethanol fuel category with the equivalent of 611km/l, breaking their 2011 record by 100 km/l. “No-one would dream of getting over 600 kilometres from one litre of fuel, and we don’t expect family cars to look like ours,” says team manager Andreas Junker. “But perhaps we can meet car manufacturers half way.”

The Electricar Solution team from Lycée des metiers Charles Privat, France, set a new record for energy efficiency on an electric battery electric with 263km/kWh. “It’s all about the preparation,” says team leader Marc-Antoine Souchet. “Our car can go 50km/h so one day the technology could be considered for town driving.”

Off the track, teams receive awards for achievements including technical innovation, eco-design and safety. The best team spirit award went to EMIteam from Morocco. Their car arrived days after them and they were only able to make one attempt, but they remained positive: “We are so happy,” says Sara Boulam, team manager. “For every problem there is a solution!”

This year alongside the competition a lab offering interactive activities around the future of energy welcomed over 40,000 visitors, while a one-day Business Forum brought together leader and experts to discuss challenges to the health of our planet.