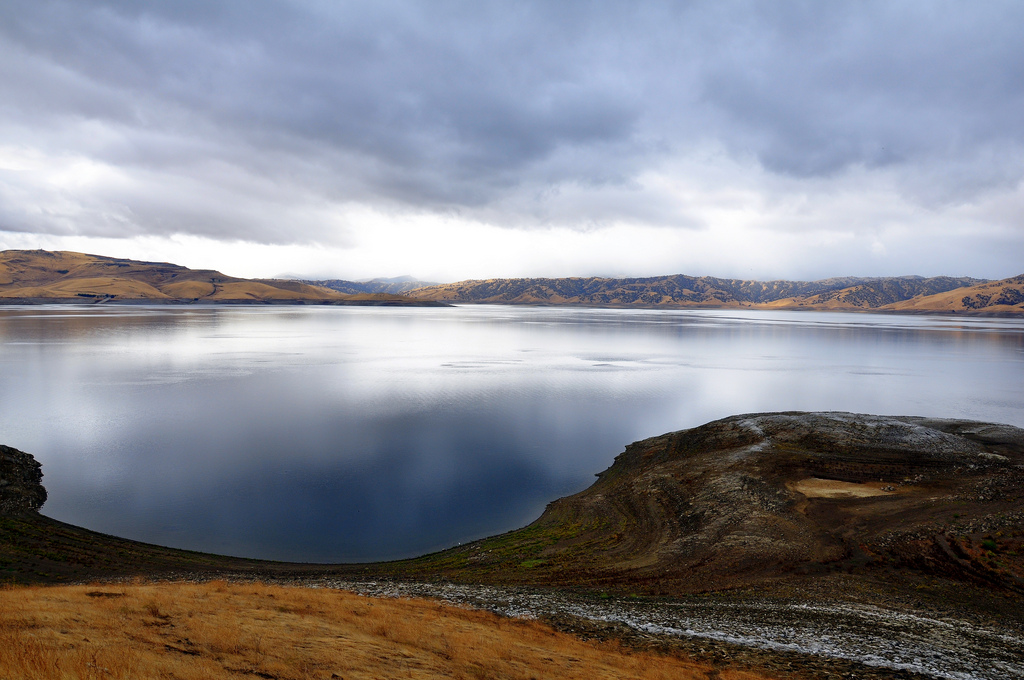 The ever increasing demand for freshwater has taken its toll, and the state’s reservoirs are only at 46.4% of their capacity. Now, by using imagery provided by the Landsat 7 and Landsat 8 satellites, we can also see how the reservoirs have changed during the 21st century.

Below are 10 reservoirs that have dwindled considerably since 2001. The “before” picture for each slide is from September or October 2001, while the “after” picture is from the same month in 2016.

Move the slider over each image to see the changes.

Lake San Antonio is located in Monterey County (used to cross the border to northern San Luis Obispo County) and covers an area of 8.9 square miles (23 square kilometers). The lake is formed by the San Antonio Dam on the San Antonio River. The dam was completed in 1965 and is 202 feet (62 m) tall.

Lake Cachuma is located in central Santa Barbara County, on the Santa Ynez River. The reservoir was created by the construction of Bradbury Dam in 1953, which is 201 ft (61 m) high. At full capacity, Lake Cachuma has a surface area of 5 square miles (13 square kilometers), but it hasn’t reached that since July 2011.

San Luis Reservoir is the 5th largest reservoir in California, approximately 9 miles (14 km) long and 5 miles (8 km) wide. It is located in Merced County, west of Los Banos on State Route 152. The dam that created the reservoir is called San Luis Dam, was completed in 1967 and is the 4th largest embankment dam in the United States.

The last time the reservoir came close to reaching full capacity was in April 2011, when San Luis Reservoir was 99.3% full.

New Melones Lake is located in the central Sierra Nevada Foothills on the Stanislaus River and has a surface area of 19.6 square miles (51 square kilometers). The reservoir is formed by the New Melones Dam, which is 625 ft (191 m) high.

The water level in the lake has been in an almost continuous decline since July 2011.

Lake Berryessa is located in Napa County and was formed by the Monticello Dam, a 304-foot (93 m) concrete arch dam that was completed in 1957. Lake Berryessa hasn’t reached full capacity since April 2006.

Trinity Lake was formed by Trinity Dam, which was completed in the early 1960s and stands 538 ft (164 m) high. The lake, formed on the Trinity River, is one of the largest reservoirs in California. It came close to reaching full capacity in June 2011 but hasn’t reached average historical levels since June 2013.

Lake Casitas is located in the Los Padres National Forest of Ventura County. It was created by the construction of Casitas Dam on Coyote Creek, 2 miles (3 km) before it joins the Ventura River. The dam was completed in 1959 and is 334 ft (102 m) high.

The water level in the lake has been in decline since April 2011, when the reservoir was 87.3% full.

Like Lake Casitas, Lake Piru is also located in Los Padres National Forest of Ventura County. It was created in 1955 by the construction of the Santa Felicia Dam on Piru Creek. The water level in the lake has been in a steep decline since August 2012.

Lake Perris was completed in 1973 and is located in a mountain-rimmed valley between Moreno Valley and Perris, in what is now the Lake Perris State Recreation Area. The dam that impounds the lake is 128 ft (39 m) high. The lake hasn’t reached its average historic level since September 2005.

Santa Margarita Lake, also called Salinas Reservoir, is located several miles southeast of the town of Santa Margarita in San Luis Obispo County. The lake was created by the construction of Salinas Dam on the southern end of the Salinas River.

The dam was built in 1941, and the lake provides the city of San Luis Obispo with a portion of its drinking water. The water level in the lake has been declining since June 2011.